This project was not only our first team effort but also the first time the majority of team members were exposed to Houdini, unfamiliar with how it could be used for game development. This seems to be rather common among indie (mid to lower budget) game development teams and is one of the reasons why we wanted to explore its features. Houdini is a powerful development tool and we believe it can significantly aid and speed up production.

Having clear goals and understanding the main priorities of the project was a definitive focus, especially when faced with feature creep during the week. The phrase “can we live without it?” became somewhat of a team mantra, as there was more content planned and suggested than could be produced before the deadline.

Although a challenging experience, the end result speaks for the team’s dedication and perseverance in achieving a satisfactory game that met our visual and gameplay objectives before the seven-day deadline. 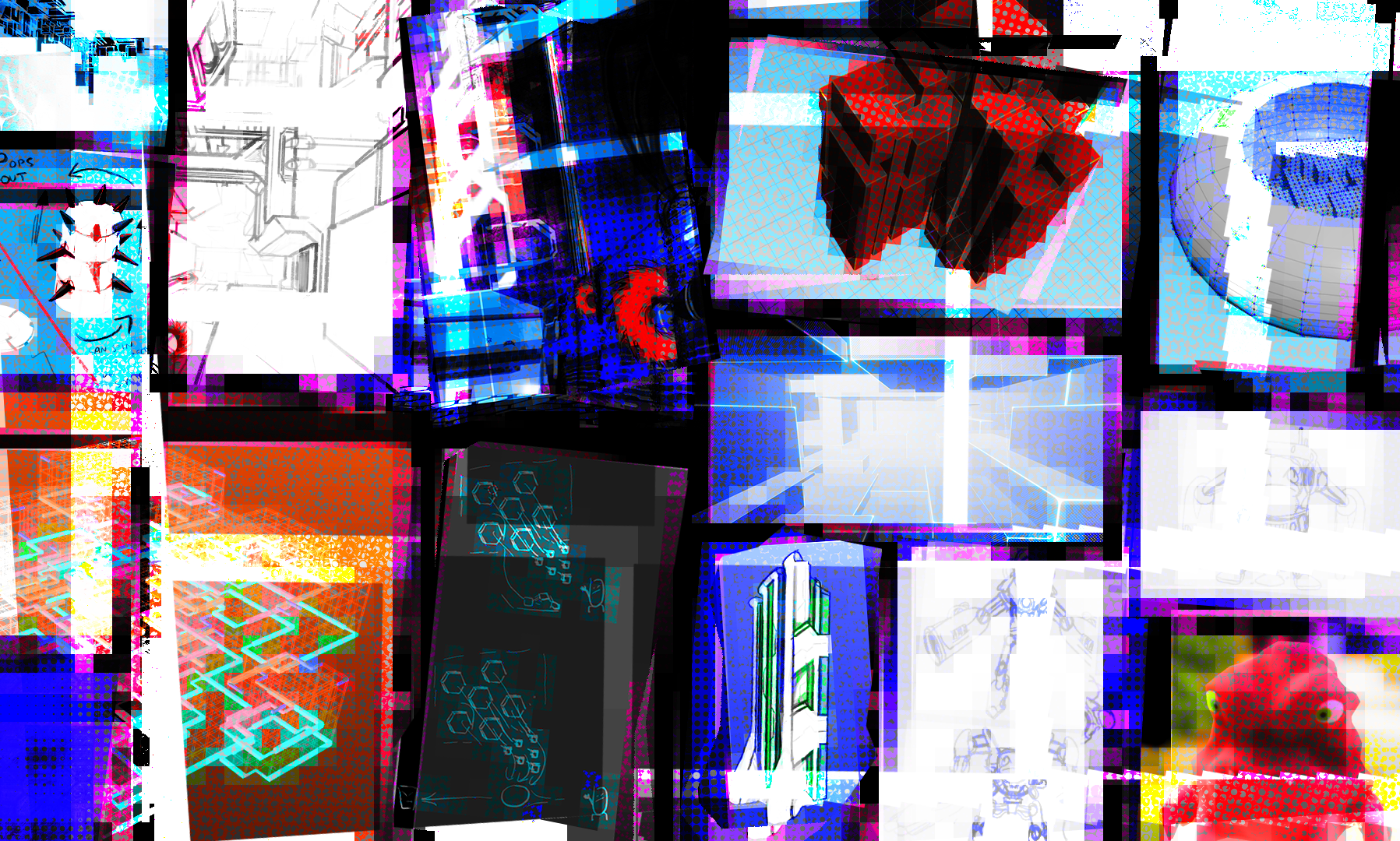 We wanted to make a fast-paced game with a simple story so we could focus on the technical features of Houdini and Unreal Engine to develop the idea of transmutation, freedom of movement. Once the game jam’s theme was announced we began to research games that we could draw inspiration from and ultimately chose Control for telekinesis and environment structure, Doom for fast-paced arena gameplay, Ghostrunner for wall-running and art style, and Full Metal Alchemist anime for its concept of transmutation.

Experimentation began on the transmutation mechanic to align it with the theme. In the final version of the game, the player is able to grab sections of the environment, specifically walls, and turn them into projectiles to defeat enemies, thus ultimately “running out of space.”

We wanted to give the player complete freedom to traverse the levels, utilizing transmutation to remove walls, enabling the player a way to approach enemies from a higher vantage point, or to make a quick escape. This traversal includes wall-running, air dashing, and grappling.

Work started on the implementation of the Houdini Level Builder from day one. Early on we decided that concept art would need basic visual design elements more than detailed props to better fit the defined system of the Houdini Level Builder tool. However, it took us several days to figure out how the environment should look, with its design going through many iterations before settling on one that would work perfectly. 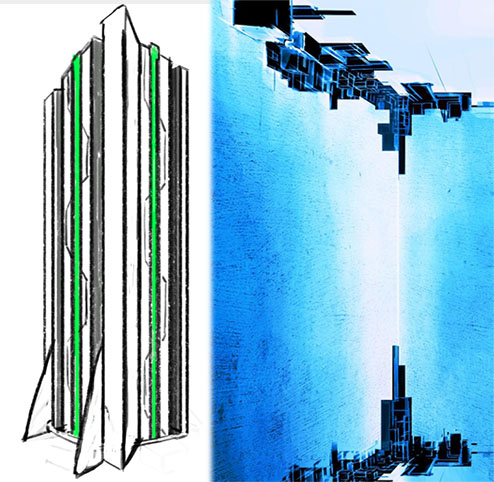 As far as level design and construction, there was a definite philosophy of “less is more” that we wanted to follow so we built our 3D content creation pipeline around the mid-poly modeling technique. The reason for this was to avoid high-poly to low-poly modeling, unwrapping, and baking of unique texture maps. Instead, we used custom-made tileable textures and shaders.

The main reference we took for level structure and how we would approach building the environment was Remedy’s Control, which also utilized Houdini. We kept the level design structure simple so it would fit the transmutation mechanic. Being able to manipulate the environment completely was also necessary for our vision of player movement freedom and how combat would be handled. 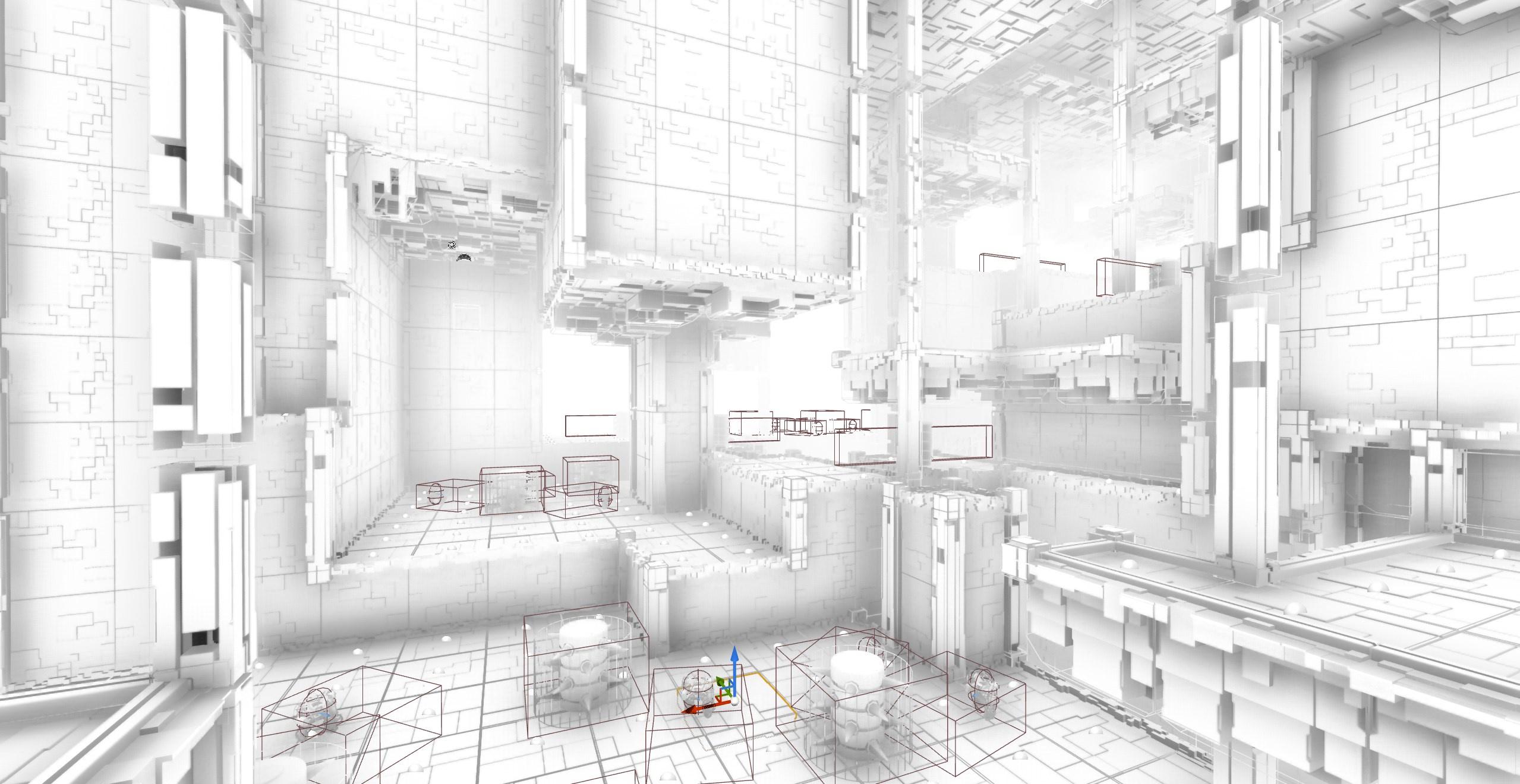 To break up shape simplicity the game’s visual style involved vibrant colors, inspired by Ghostrunner’s digital level aesthetic. We achieved this by finding a shape language through a series of concept artwork, sketches and designs, until we finally settled on the perfect design for the level’s architecture. 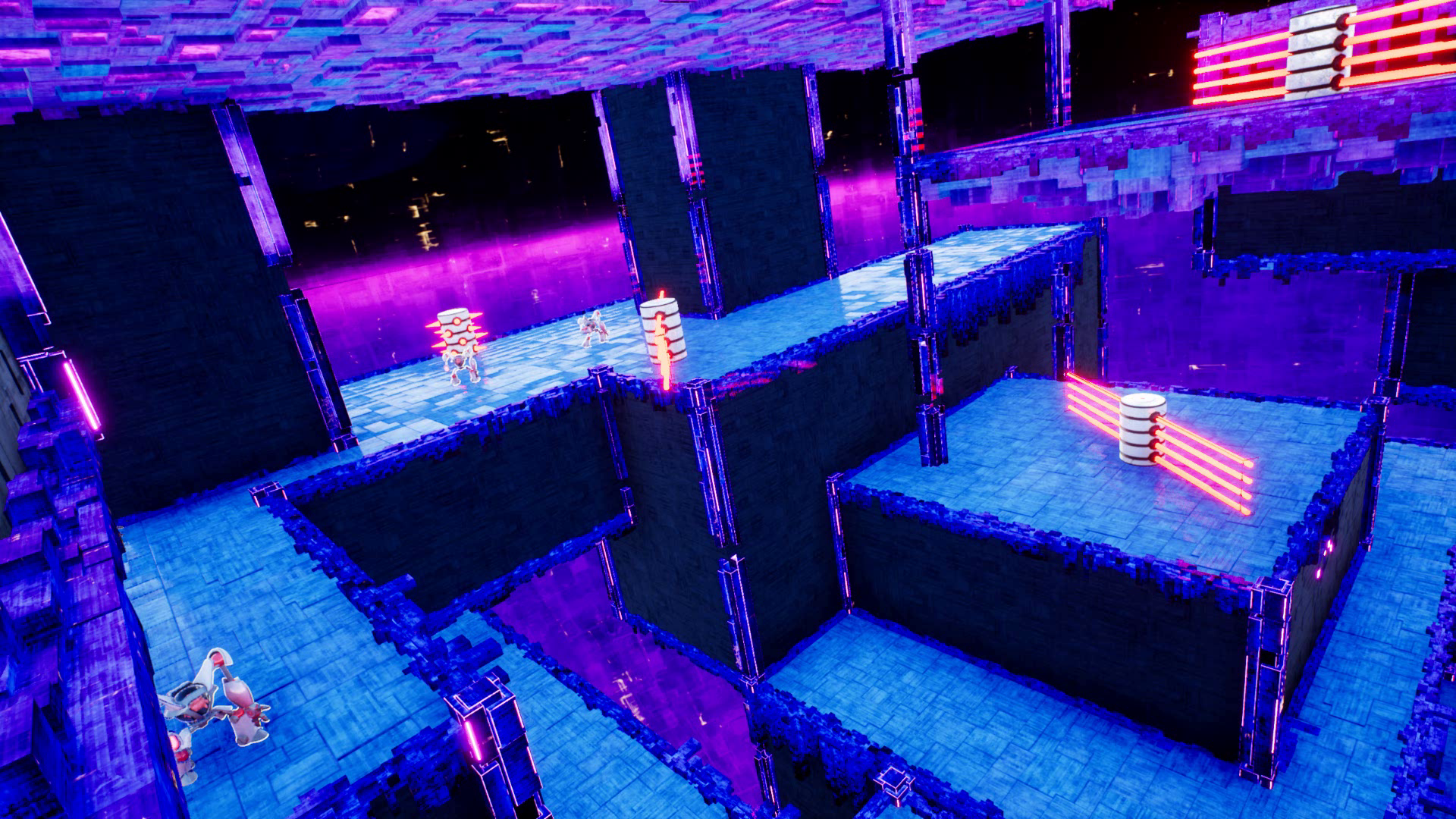 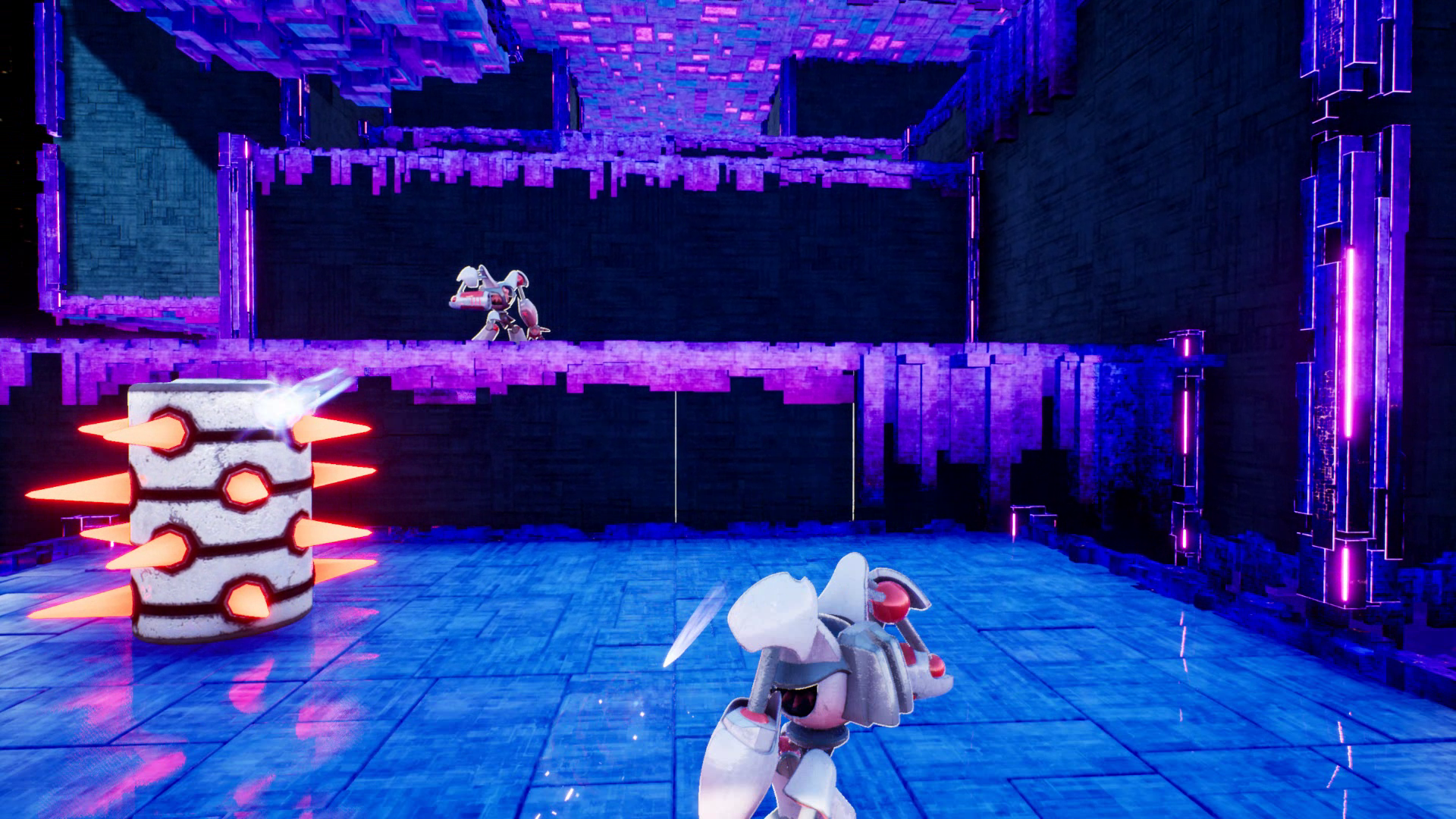 The simple story revolved around an alien invasion of Earth through a portal or dimensional rift. We didn’t want the game to take itself too seriously, so for enemies, we definitely wanted something wacky.

For the overall enemy concept, we took inspiration from Crysis’ bio-mechanical invertebrate aliens, albeit with a much less serious tone. Games like Ratchet & Clank and films like Mars Attacks were suitable in terms of the visual aesthetic and wackiness we were going for, so they too were used for inspiration to offset the seriousness of the enemy concept. 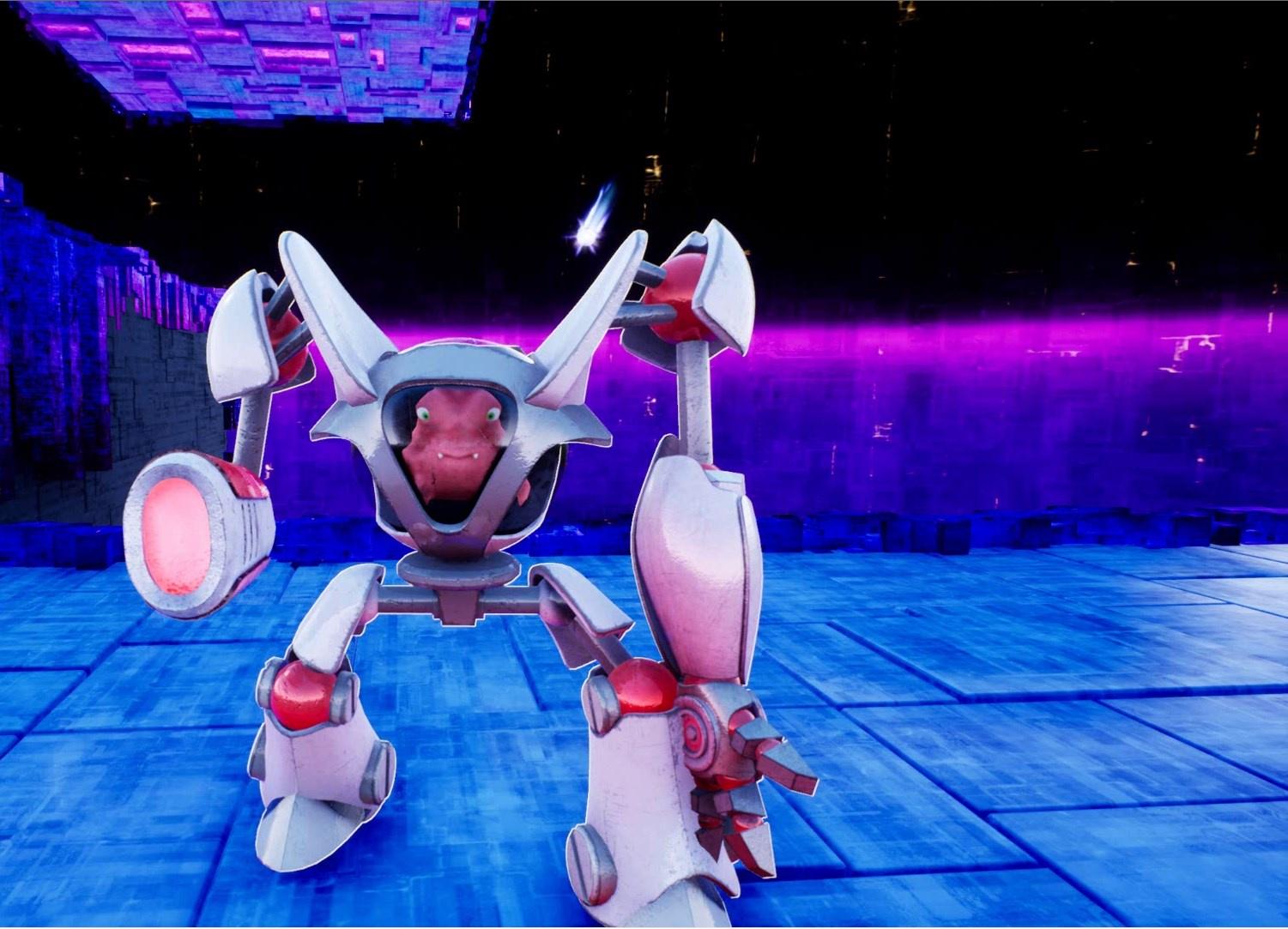 The enemy design went smoothly during pre-production, as there were a plethora of sketches that our Character Artist was able to produce. This gave us a massive choice of design elements which we then were able to use during a rather fun mix-and-match effort that would become the final design. 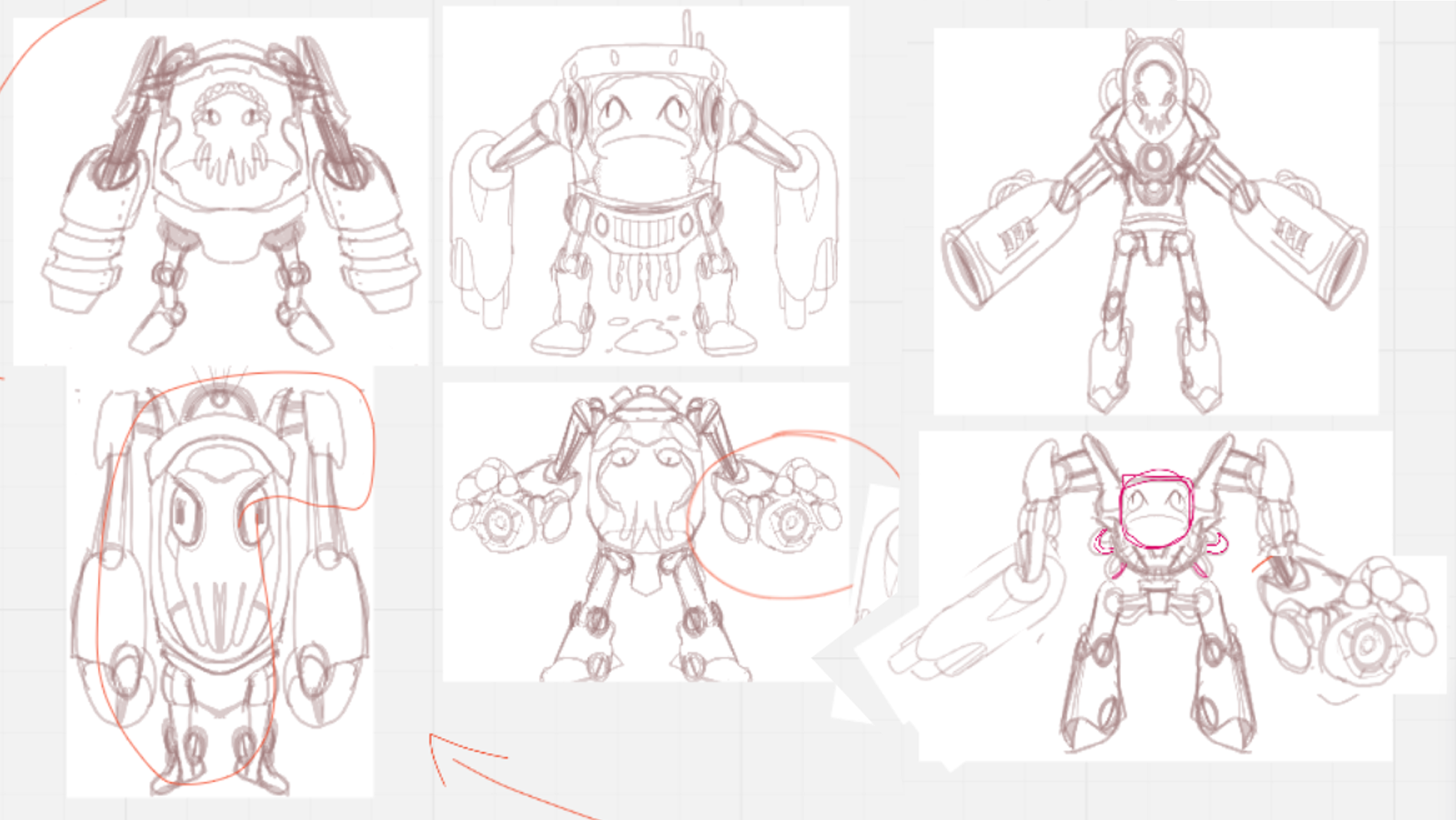 Considering how time-consuming the animation and rigging process is, we decided to use Paragon animations (and effects), and the Mr. Mannequin Blender add-on for rigging.

Fun fact: Although modeling of the enemy also went smoothly we failed to realize that, upon completion, this rather high-poly model of 70.000 triangles was imported into the engine by accident.

The direction for the audio experience was determined early on when the concept of transmutation was discussed and it was established that the environment would appear to be a mix of digital and solid surfaces. The transmutation sound (turning sections of the wall into projectiles) was a mix of “wooshes” (to represent the telekinetic force) and the sound of glass breaking and ice cubes to represent the digital transformation of the physical environment.

“The music soundtrack was quite fun to create. Since the game was meant to be fast-paced, and set in a hi-tech “digital” world I decided to create a psy trance track. This style of electronic music is fun, and very exciting. The typical tempo of this genre is faster than your commercial EDM track so I took advantage of that with the intention of keeping the player’s heartbeat up during gameplay”.

The challenge with audio was mainly to make sure that all sounds blended well with the environment and that it reflected the gameplay. For example, the sounds of the player taking damage can easily be confused with the sound of the enemy shooting at the player. In some instances, specially during a heated battle, the player may not realize he/she is taking damage solely based on the audio cue since a visual cue was not implemented. Another challenge was to reflect the time-slowdown that happens when the player grapples or transmutes a wall. We experimented with sub mixes to lower the pitch and apply an LPF on some sounds in the environment but that didn’t feel natural. Ultimately the idea was scrapped due to time limitation.

A closer look at how we used Houdini

Firstly we made prop-generator tools in Houdini that would allow us to generate all the environment art for the game with a variety of different environment elements such as floors, walls, ledges, pillars, and any other asset we would need. After that, these generated assets could be used within the Level Builder tool, which was also made with Houdini. This allowed us a system that would enable the assembly of the levels themselves in engine via the Houdini Plugin, where we had the freedom to either procedurally generate levels, or custom design levels by doing a blockout and replacing the placeholders with the proper art assets automatically.

In addition, Houdini was used to model assets like traps, transmuted projectiles, as well as a last-minute boss that we added late in development, as opposed to using more conventional 3D modeling software. Surprisingly, Houdini was even used to help create environment textures in combination with Substance Designer. Houdini was quite useful too in optimizing the topology and UV’s of the enemy model. 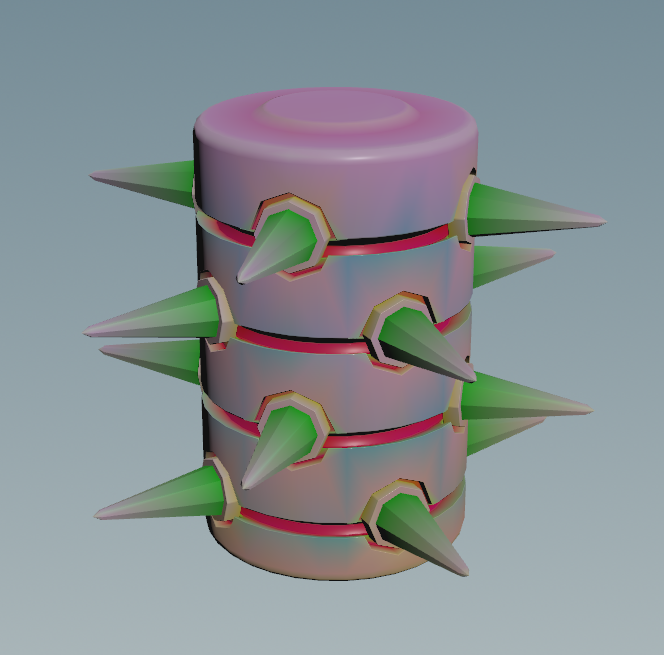 There were a few things that had to be cut from the project, mainly due to the obvious time constraints that we faced, namely:

What’s next for us?

Thanks for reading our Epic Game Jam 2021 project post-mortem!